BMW make their 3 and 5-Series cars available in Authorities Vehicles specification to military and police organizations. These vehicles are available in a number of configurations and offer a choice of several exclusive accessories.

Most intriguing is a special option for undercover assignments. Let us say you were on your way to make a investigative call at the local offices of SPECTRE, the Special Executive for Counter-intelligence, Terrorism, Revenge and Extortion. 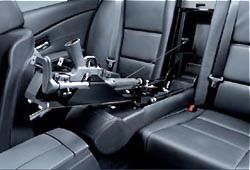 The rear armrest flips down and from behind the rear seat (via the ski pass-through) emerges a battle-ready Heckler & Koch MP5 9 mm submachine gun (capable of firing 800 rounds per minute) and two spare magazines (in the event an extended siege ensues.)

The motto of the Authorities Vehicles division is The drive to see any mission through.

If Desmond Llewelyn was still with us, I am quite certain Daniel Craig’s Aston Martin would be fitted with one of these.