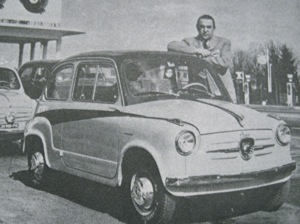 In the 1950’s, long before a Mini Cooper, Lotus Cortina, BMW Alpina or AMG Mercedes ever turned a wheel, two cars debuted that introduced the concept of sanctioning outside firms to design and create modified, high-performance versions of standard road-going sedans. These cars, like their successors that would follow, combined the everyday practicality of the family car with a healthy dollop of the performance and driving pleasure of a sports car.

The first was produced in 1956 by Carlo Abarth in the form of the Fiat Derivazione Abarth 750, based on the recently introduced Fiat 600 Berlina. Far from being simply a repository for a collection of bolt-on pieces, the 750 was heavily modified by Abarth in a very thorough and systematic fashion that would set the standard for future vehicles of its type.

Abarth had already been in the business of selling aftermarket exhaust systems and tuning parts for a variety of vehicles; the Fiat Topolino and Nuovo 1100 in particular. They also built a wide variety of prototypes and limited-production sports and racing cars. When the new Fiat 600 was introduced, the decision was made to offer the enthusiast driver a comprehensively modified version of a standard production car for the first time.

Extensive testing was performed to ascertain what changes would be required to maintain drivability and dependability while extracting maximum useable performance. The end result was a raft of modifications that transformed the humble 600 into a tiny sporting conveyance that rewarded the driver with tactile and aural rewards that were previously the exclusive purview of much more exotic machinery. It proved immensely popular both on the strada and at the autodromo.

Upon receiving brand new 600’s from Fiat, Abarth workmen would immediately remove the engine and transmission for disassembly. The labour invested in the engine block is indicative of the level of detail that went into the car. While boring the cylinders to increase displacement, tappet bores were machined allowing clearance to accommodate increased valve lift, and oil galleries enlarged to increase flow to the centre crankshaft main bearing.

A fully counterbalanced and polished crankshaft was added, along with high-compression domed pistons and a new higher-lift Abarth camshaft. The Fiat cylinder head with its integrated intake manifold received polished ports, larger valves and an enlarged intake opening to accommodate a larger single-throat carburettor. Of course, an Abarth exhaust was fitted, with a four-into-two manifold feeding a twin-pipe silencer. Power peaked at 5500 rpm and the engine would buzz up to 7000 rpm without protest.

The engine fed its newly found power through a lightened flywheel and stronger clutch. To take advantage of the greater torque output, a new ring and pinion was fitted to the transaxle, raising the final drive from 5.38 to 4.88. A larger radiator kept temperatures in check. Inside, a 145 km/h (90 mph) speedometer replaced the original 110 km/h unit and a tachometer with matching dial was fitted adjacent to the original instrument cluster.

In 1960, the engine was bored and stroked further to become the Fiat Abarth 850 TC (Turismo Competizione). To accommodate the increased performance, the car now came with lower, stiffer springs and dampers. Ventilated wheels helped cool the new front disc brakes. And a new instrument cluster with a larger central tachometer was added. To provide additional cooling in competition, additional radiators were installed, first underneath the rear of the car, then under the front bumper.

As an additional cooling aid, the engine lid was provided with folding props that would hold the lid open about 15 degrees. During routine testing, it was found that cars using the propped-up lid were faster around the track due to reduced aerodynamic drag. This gave rise to experimentation in 1962 that ultimately led to brackets that held the engine lid so high as to be actually parallel to the road surface on the high performance ‘Nürburgring’ versions of the 850 TC. By 1969, the raised engine lid was replaced by a fibreglass whaletail on FIA Group II and Group V competition models. In 1964, steadily increasing power led to the front bumper being replaced on the Nürburgring models by a fibreglass nosepiece containing a still-larger coolant radiator. The extended nose and raised engine lid gave the competition Fiat Abarth Berlina its definitive profile – a shape that would become an icon of 1960’s touring car racing. 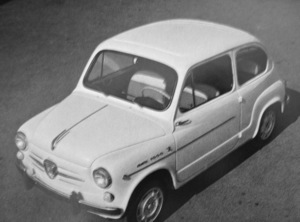 Eventually, the car was built in both 850 and 1000 cc versions, either of which could be ordered as an ‘R’ model with an Abarth Radiale cylinder head featuring polyspherical combustion chambers and twin dual-throat Weber carburettors. These engines produced up to 110 hp at 7600 rpm and were coupled to 5-speed gearboxes. 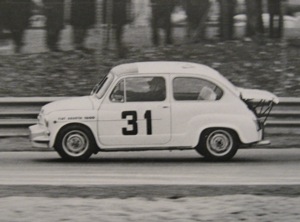 The diminutive Fiat Abarth encompassed nearly every evolving automotive technology of the 1960’s: five-speed transmissions, disc brakes, lightweight alloy wheels (Abarth was one of the earliest adopters, first offering them as one of several options in 1962), wide (and staggered width) wheels (throughout the sixties, the wheels grew from the original 3.5 x 12” up to 8 x 13” on Corsa versions), and aerodynamic aids (the raised engine lid and the signature Abarth parallelogram windscreen wipers designed to keep the wiper blades in line with the airstream). 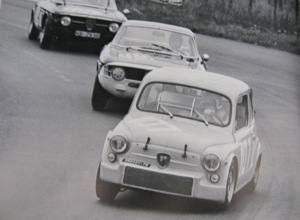 Competition Fiat-Abarth Berlinas battled in the 850 and 1.0 liter Touring classes against 850 and 997 Mini Coopers, DKW 850’s and 1.0 litre NSU’s and Auto Unions. The Abarths usually dominated entry lists and leader boards at major international events like the 500 km of Nürburgring and the 4-hour challenge cup at Monza. Fiat relished the favourable publicity garnered by the racing Fiat-Abarths and awarded prize money for each victory.

As other Fiats were introduced, Abarth performance versions were quick to follow, most notably multiple iterations of the 500 and 850. Abarth continued to forge closer ties with Fiat until Fiat ultimately purchased the firm in 1971. Abarth became the Fiat in-house competitions department, developing the Fiat Abarth 124 Rallye, which claimed second place in the World Rally Championship in 1973 and 1974; and the Fiat 131 Abarth, which won the WRC Championship in 1977, 1978 and 1980.

Fiat allowed the Abarth marquee to languish for a couple of decades, but revived the nameplate in 2007 to anoint performance versions of the Grande Punto and more recently, the 500. 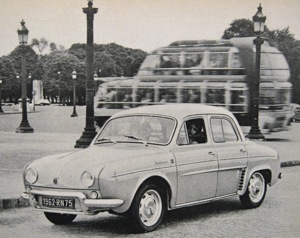 Renault Dauphine Gordini in Paris; 1963. Regular readers of Auto Universum will of course recognize the vehicle in the background as a Citroën U55 Currus Cityrama

The second aftermarket-modified car to hit the road with the factory’s blessing was the Renault Dauphine Gordini of 1957, the brainchild of Amédée “Le Sorcier” Gordini. Whereas Carlo Abarth was born in Austria and established his business in Italy, Monsieur Gordini was born in Italy but moved to France to seek his fortune.

Amédée first established a shop in Paris that specialized in Hispano-Suiza repairs and tuning. Later, when the French Simca firm began building Fiats under license (beginning with the 500 Topolino), he began tuning and racing Simcas and Simca-based specials under the banner of Équipe Gordini. Amédée’s cars racked up numerous victories in Grands Prix, Le Mans and the Tour de France.

In 1956, he retired from racing and his association with Simca and joined forces with Renault. The first product of this alliance was the Renault Dauphine Gordini.

The Dauphine was launched in 1956 and was powered by an 845 cc version of the venerable Renault Ventoux engine originally introduced in 603 cc form in 1947. Gordini had to retain the 845 cc displacement as this was the design limit for the engine. Compression was raised from 7.6 to a still-conservative 8.0 to 1 and a Gordini-modified cylinder head was added along with a larger carburettor. A 4-speed gearbox was fitted in lieu of the standard 3-speed unit. Wider wheels and tires and lowered suspension completed the package. A few years on, a few more horsepower were extracted and 4-wheel disc brakes added. 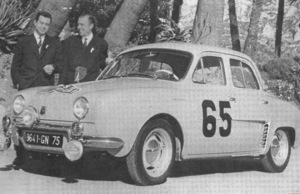 While the Dauphine Gordini met with some successes, notably overall victory in the 1958 Monte Carlo Rally; the real fruit of the Renault-Gordini partnership came with the development of the subsequent Renault-Gordini, the R8, which debuted in 1964.

The R8 became somewhat of a rally legend, renowned for local and national victories and consistent podium finishes in world championship events, from third place at San Remo in 1965 to third place at the Czech Rally in 1969. One of the major victories for the R8 Gordini occurred when Jean François Piot and Jean Brenaud scored overall victory in 1967 at the Munich-Vienna-Budapest Rally, a venue heretofore dominated by the Mini Cooper S.

At the end of 1968, Gordini was acquired by Renault and later merged into Alpine (which Renault acquired in 1974) to create Renault Sport. Many Gordini engineers were instrumental in developing Renault’s F1 program.

When Grand Prix’s 3-litre engine formula was introduced in 1966, provision was made for teams to alternatively run 1.5-litre forced-induction engines. However, this avenue was never taken until the mid-seventies when Renault Sport began development of the Renault-Gordini 1.5 litre V6 fitted with a turbocharger; the first-ever turbo application in Formula One.

Entered midway through the 1977 season, the Renault RS01 ushered in the turbo era in Grand Prix racing that would continue for a decade. Unfortunately, Amédée passed away less than six weeks before a Gordini-powered F1 Renault claimed its maiden victory at the French Grand Prix on the first of July, 1979.