Today there are a plethora of warmed-over family sedans available to the driver seeking a sporting, yet practical form of transport: BMW M’s, VW Polo and Golf GTI’s, RenaultSport Renaults, R-Series Volvos and numerous others. Such was not always the case. While there were certainly vehicles which could be construed as sporting sedans such as the Alfa Romeo Giulietta Berlina and the Jaguar Mark I 3.4, and a number of sedans were offered with optional higher-output engines; a definitively and comprehensively upgraded sedan conceived specifically for the sporting driver was not available until 1953.

It arrived in the form of the Fiat 1100 TV, or if you prefer, the Millecento Tourismo Veloce. This version of Fiat’s mainstream 1100 was meant for the driver interested in high-speed touring.

Fiat boosted the compression of the 1100’s engine, added a more aggressive camshaft and a larger dual-throat Weber carburettor. Oil pressure was increased to ensure longevity of the engine internals during long journeys on the Autostrata. To help the driver maintain a brisk pace after the sun dipped below the horizon, a distinctive centrally-mounted ‘cyclops-eye’ driving lamp was fitted into the grille. Befitting its status as the pinnacle of the 1100 range, the TV was given two-tone paintwork, with the roof finished in a either a complimentary or contrasting colour.

The 1100 TV was a popular entrant in both the Mille Miglia and the Targa Florio. In 1956, Ugo Mauthe piloted a TV to second-in-class and 17th overall in the Targa. Coincidentally, earlier the same year, another 1100 TV finished an identical 17th overall in the Rallye Monte-Carlo.

The world entered the Space Age in 1957 when the Soviet Union launched Sputnik I into earth orbit. Down on terra firma, Alfa Romeo announced a high-performance version of the Giulietta Berlina, created by installing the engine from the Giulietta Sprint and adding a tachometer to help the driver extract the most from the aluminium twin-cam engine. Breathing through a larger dual-throat Weber carburettor and benefiting from higher compression, the Sprint engine would rev happily to 7000 rpm. They christened their new creation the Giulietta TI (Tourismo Internazionale). 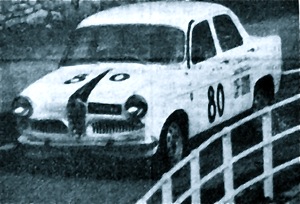 Two new entrants appeared in 1958. Fiat again stepped into the breech, this time with a sporting version of the Nuova 500 called, quiet logically, the 500 Sport. The standard 500 powerplant was increased from 480cc to a full 500cc, and received a reworked cylinder head and larger carburettor.

The end result was a dramatic 43% boost in power for the Sport. To increase structural rigidity, the traditional 500 Transformabile roll-back roof was deleted in favour of a full steel top.

A pair of 500 Sport pilots prepare for battle

All Sports were produced in light grey with red wheels and accent stripes. The new high-speed 500 dominated its class at the 1958 12-Hours of Hockenheim.

From Sweden came the Saab Grantourismo 750, first presented at the New York International Automobile Show in April of ’58. The GT750 raised the ante for a factory-built sports sedan, being pretty much a rally-ready version of the 750, even to the extent of being fitted with a Halda Speedpilot. The cornerstone of the GT was a high-output twin-carburettor version of the classic 3-cylinder Saab two-stroke engine.

Saab also added driving lights, a wood-rimmed aluminium steering wheel and a special instrument panel incorporating round dials and a large tachometer. The passenger seat was fitted with a headrest so that a tired navigator could catch some sleep during long transit stages. Volvo responded the following year with the Amazon Sport (122 S), featuring a twin-carburettor engine and a four-speed gearbox.

Chrysler, who had building limited numbers of their powerful 300 model for competition homologation purposes, pulled out the stops for the 1960 edition, lavishing the new 300-F with a tachometer, four leather-upholstered bucket seats and a blacked-out grill. Over the rest of the decade an avalanche of sporting sedans arrived. In 1962, Renault announced the Dauphine 1093; Americans could purchase Chevrolet SS and Monza sporting variants and Ford buyers could select an XL sport version of the Galaxie. In 1963 Ford released the Cortina GT and the Falcon Sprint. The Sprint went on to place first-in-class in the 1963 Rallye Monte-Carlo.

In 1964, BMW unveiled a TI version of the 1800, with twin-carburetion, an in-dash centrally-mounted tachometer and upgraded suspension. An even higher performance version, the 1800 TI/SA, was later developed by BMW Motorsport, and is considered the father of today’s BMW M cars. The sporting versions of the 1800 took first-in-class in the 1965 Rallye Monte-Carlo and the 24 Hours of Spa.

That same year, Austria released the Steyr-Puch 650 TR, a high-performance version of the 650 T that would go on to win the 1966 2.0-litre European Rally Championship in the hands of Sobieslaw Zasada.

1965 saw the introduction of the Alfa Romeo Giulia Super and the legendary NSU 1000 TT. In 1966, Rover brought forth the 2000 TC. By the end of the 1960’s, factory produced sporting sedans were no longer a rarity and by the end of the decade, even Mercedes-Benz entered the arena with the legendary 300 SEL 6.3.