I can think of no other vehicle that so epitomizes the unbridled optimism of the early 1960’s that pervaded Western Europe and the United States than the Amphicar 770.

This confidence in the future, born of an unwavering belief in technology and general good feeling at having survived wartime austerity (and indeed, the war itself) produced a unencumbered embrace of anything that appeared new, advanced or modern. The Amphicar certainly qualified on all counts.

The story of the Amphi starts with German engineer Hans Trippel. Trippel had been fascinated with the idea of amphibious vehicles since the 1930’s and designed a number of them, selling around 800 units to the Wehrmacht and Waffen-SS.

SS infantry regiment on patrol in a Trippel SG6/41

Unfortunately for Hans, the smaller Volkswagen-based Schwimmwagen, designed by Ferdinand Porsche and Irwin Kommenda in 1938 was the preferred amphibious transport for the German military throughout the war.

Hans was finally able to bring his dream of a practical civilian amphibious car to fruition in the 1960’s. Harald Quant of Germany’s Quant Group was a fellow amphibian enthusiast and helped to bankroll the development and production of Trippel’s creation at a Quant subsidiary, IWKA. 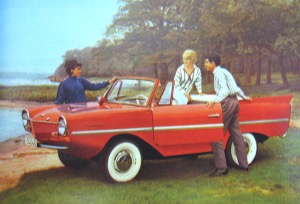 The resulting new Amphicar 770 was introduced to the public in 1961. Available solely as a two-door, four-seat convertible, its unitized body was constructed of heavy-gauge steel to prevent minor marine mishaps from causing hull penetration. The rear-mounted engine was a 1.2 litre Standard-Triumph inline water-cooled 4-cylinder unit from the Triumph Herald. The 4-speed transaxle was specific to the Amphicar and incorporated a switchable forward-neutral-reverse power takeoff (the water transmission) at its nose that sent power to dual propellers.

Suspension was independent trailing arm front and rear with double-jointed axles at the back. Coil springs were utilized at both ends. Four-wheel drum brakes with special water-resistant linings featured dual leading shoes at the front.

To facilitate easy ingress and egress in and out of the water, the 770 featured unusually large approach and departure angles and a generous ten inches of ground clearance. The copious clearance combined with rear-engine traction made the 770 a superb snow vehicle.

In order to provide clearance for the water transmission, the rear seat was set several centimeters higher than the font seats. As a result, rear passengers enjoy the visibility benefits of stadium-style seating.

A coveted accessory: AM, FM, Marine Band and Short-Wave radio

To morph from car to boat, one only has to secure the doors tightly via the secondary inside handles located at the lower rear edge of each door, make sure the bilge plug is in place and that the front luggage bay lid is secured. 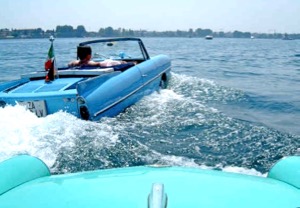 A pair of Amphicars cruising on Lake Garda, Italy, 2002. Photo via Amphicars.com

When diving into the water, simply place the road gearbox in neutral and engage the propellers in the desired direction by means of the floor-mounted selector lever adjacent to the gearshift lever. A lamp in the instrument cluster glows to show that the props are in operation.

In water, direction changes are accomplished via the steering wheel, using the front wheels as dual rudders. Speed can be adjusted using the accelerator or a dash-mounted hand throttle that can be locked in position. Rapid deceleration is achieved by reversing the propellers by means of the prop selector lever.

Any water that seeps or splashes in can be dispatched by activating the bilge pump via a dash-mounted switch. Bilge water is ejected through a chrome outlet just inboard of the right rear (starboard side, stern) turn indicator.

Stirling Moss pilots an Amphicar down the Thames in London, 1965. Photo via Amphicars.com

Nearly 4000 Amphicars were sold between 1961 and 1968. Most were exported to the United States. An expensive item, the Amphi never achieved high sales volume and the changes required to meet the upcoming U.S. safety and emission regulations would have been onerous. Further, the Amphicar’s financial champion, Harald Quant, passed away in late 1967. Thus, the Amphicar was no more.

Honoring its place of birth, the Amphicar steering wheel boss featured a depiction of Holstentor, the western entrance gate to the town of Lübeck, a German port city on the Baltic Sea. The 15th Century Gothic structure is now a UNESCO World Heritage Site.

Despite the wailing of some naysayers, who expected the Amphicar to perform like a Porsche Speedster on the road and a Riva Aquarama on the water, the 770 was a quite clever design, and most impressive coming from a start-up which heretofore had built neither car nor boat. Due to the fact that it had to perform as both a car and a boat, the compromises necessary certainly impacted its performance as compared to a non-amphibious car or boat. The validity of the original design concept can be illustrated by the fact that throughout its production, no major changes were ever required. 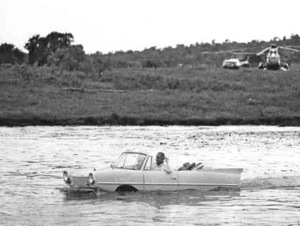 Lyndon Johnson cruises in his Amphicar on the lake at his Texas ranch shadowed by a pair of Secret Service helicopters, 1963. Rumors of a Russian submarine operating in the lake proved unfounded.

Among notable Amphi owners was U.S. President Lyndon Johnson, who owned an early Lagoon Blue 770 that he kept until he passed away in 1973. The car now resides at the LBJ National Historical Park in Texas.

While not speedy, the 770 was certainly seaworthy. A gentleman by the name of Ray Bowe cruised from Miami to the Bahamas in the early 1960’s, Howard Singer sailed an Amphi from California to Catalina Island and Amphi’s have at least thrice crossed the English Channel.

David and Cameron Chapman display the proper headgear to wear when piloting an Amphicar. Photo via Amphicars.com

The Amphicar has appeared in a number of films, the best of which was the 1967 movie, The President’s Analyst, which stars James Coburn as personal psychiatrist to the U.S. President. In the film, a Regatta Red 770 was used as a yacht tender. Lowered into the water, it sails to shore and proceeds to drive inland. The film also features Barry McGuire of Eve of Destruction fame.