You Only Live Twice was the cinematic Bond’s first visit to the exotic and mysterious East. Following the old adage when in Rome… it was decided to utilize a Japanese vehicle for the MI6 Agent. With that criteria; what could be better suited to transporting the world’s favourite secret agent than Japan’s first high-performance sports car, the sleek new Toyota 2000GT?

First shown at the 1965 Tokyo Motor Show, the 2000GT went into production in 1967, just in time to be incorporated in to the fifth Bond extravaganza. The earliness of the cars used in the film can be seen in the use of wire-spoke wheels rather than the cast magnesium centre-lock units used all but the first few examples built. 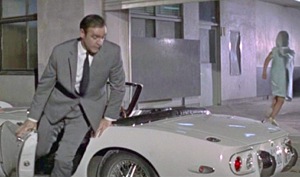 About to drop in on Tiger Tanaka

At a time when Japan was mostly known for transistor radios, miniature televisions and motor scooters, the technologically advanced 2000GT was a revelation.

The stylish GT was powered by a 2.0 Toyota M-series inline-six with a Yamaha aluminium twin-cam cylinder head fed by triple dual-throat Mikuni-Solex side-draft carburettors. Power was sent to the rear wheels through a standard Toyota 4-speed cast-iron gearbox, with a fifth ratio fitted into an aluminium tailpiece, much like the nosepiece-residing first and reverse gears in the Porsche Type 901 transaxle.

In the rear was a limited-slip differential, a first for a Japanese car. Suspension was all-independent and braking was via power-assisted four-wheel Sumitomo-Dunlop discs.

While production models were all coupés, two topless versions were built for use in the film. This was allegedly due to the fact that Sean Connery couldn’t quite fit into the low-slung coupé which was about 6 cm (2.4″) lower than an E-Type Jaguar. This is likely the case since his head always appears to be protruding well above the windscreen frame.

Both cars were finished in Pegasus White, with black vinyl interior.

The 2000GT was hand fabricated by Yamaha for Toyota at the rate of little more than one per week. The body was fitted over a steel backbone chassis. The front featured popup headlamps and built-in auxiliary lamps behind flush-mounted acrylic covers. Bottom-hinged panels behind the front wheels allowed access to the battery, air filter and windscreen washer reservoir.

A lasting styling feature of the 2000GT Coupé was the black-painted B-pillar that served to visually unify the side windows. This practice quickly spread to other Japanese vehicles including the Honda 600Z and Subaru Leone Coupé. Later it arrived in Europe on the Ford Capri II. Today, it is nearly universal.

Bond himself never drives the 2000GT; he is always chauffeured by Japanese SIS agent Aki, an adept driver and ninja combatant. 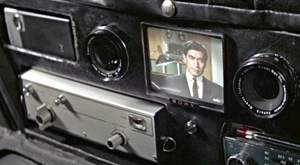 Bond and Aki are able to communicate with SIS headquarters via a special in-car audio-video system behind the seats complete with wireless handheld microphone.

None of the interior closeups were shot using the 2000GT however. This is unfortunate as the GT had a well appointed and meticulously detailed cockpit with rosewood veneer trim, a mahogany steering wheel and shift knob, individual door-mounted ashtray-cigarette lighter units, a signal-seeking radio and a dual-display clock with elapsed time chronograph.

You only Live Twice was the only period film to star the 2000GT, although a year and a half later; February 1969, a Solar Red coupé made a guest appearance in the Once Upon a Time episode of the Hawaii Five-0 television series.

THE CARS OF JAMES BOND