Paying homage to its Jet Age subtitle, today Auto Universum takes to the skies in celebration of three significant milestones in jet travel that occurred in the final year of the 1960s: the initial flights of the Boeing 747, Playboy DC-9 and Concorde. Before examining these, it is worth a glance back to the very birth of the Jet Age.

World War II was the first major battle whose outcome was largely determined by air superiority. Airplanes had come a long way since WWI in aeronautics, airframe design and propulsion. Aircraft designers soon realized that further speed increases were being held back by the limitations of engine-driven propellers, the efficiency of which falls sharply as blade tip rotational speed approaches Mach 1.0.

By the late 1930’s, prototype jet-propulsion engines to power aircraft were under development in England and Germany. In 1939, a Heinkel He 178 fitted with an experimental HeS 3 turbojet became the craft that marked the debut of what would later be known as the Jet Age.

The first jet aircraft to enter series production was the Messerschmitt Me 262-1a Schwalbe jet fighter issued to the Luftwaffe beginning in April of 1944. Powered by a pair of Juno 004B turbojet engines, the Me 262 achieved a maximum velocity of 870 kph (540 mph), over 25% faster than contemporary piston-engine propellor-driven fighters. Confiscated units were used after the war to help develop both U.S. and Soviet jet aircraft designs. 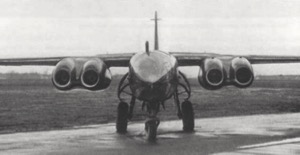 In June of 1944, the Luftwaffe began flying the Arado Ar 234, the world’s first purpose-built jet-powered bomber. It was also the first four-engined jet aircraft; the 234C version being powered by a quartet of BMW 003 Strum turbojets. This BMW jet engine went on to survive the war; an updated version subsequently going into production in the Soviet Union as the GAZ RD-20, powering the Russian MiG-9 jet fighter. 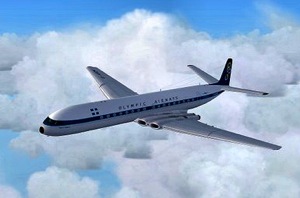 The first civilian passenger jetliner was the De Havilland DH 106 Comet, which went into service with British Overseas Airways (BOAC) in 1952. The Comet travelled at one and a half times the speed of contemporary propeller-driven commercial aircraft while the non-reciprocating, continuous-combustion jet engines and lack of propellors allowed passengers to enjoy an exceptionally smooth and quiet flight.

Boeing’s first passenger jet, the 707, was introduced by Pan Am in 1958 and is considered to be the plane that formally begat the Jet Age. It was also the first plane to be widely fitted with turbofan jet engines, in this case the Pratt & Whitney JT3D. Turbofan jets are more efficient and quieter than the original turbojet engine designs.

In production for over two decades, the 707 was a workhorse of the skies, used extensively as a short and long-haul passenger liner as well as a staple in cargo and military applications. The 1960’s were the heyday of the 707 and both the plane and the decade represented the pinnacle of the golden era of air travel.

The convenience and speed of jet aircraft enabled easy and rapid transit to destinations heretofore considered rare and exotic, chiefly due to the time and effort once required to reach them. For the first time in their lives, many were exposed to distant cultures and beguiling cuisines, the likes of which they could previously only experience vicariously though reading a book or going to the cinema.

A three-week span in the winter of 1969 played host to three aviation events that would represent both the pinnacle and the swansong of glamorous Jet Age air travel.

A pair of Pan Am Boeing 747’s behind a 1970 Ford Thunderbird Landau Special Brougham. It was commonplace for auto manufacturers to associate their products with Jet Age glamour by posing automobiles adjacent to the latest jet aircraft.

On 9 February 1969, the Boeing 747 Jumbo Jet took to the air on her maiden voyage. The giant plane accommodated four times the number of passengers as contemporary jetliners and was originally meant to be the epitome of sophistication with its upstairs sky lounge, often equipped with a piano bar.

In reality, airlines soon began adding seats and slashing prices (driving some into bankruptcy.) Many 747s were converted to single-class configurations accommodating as many as 500 passengers packed in like sardines. The majority of 747s and later wide-body competitors quickly turned into airborne cattle cars, bulging with low-fare passengers dressed in little more than sandals and tie-dyed shirts; the overhead bins bulging with battered backpacks and frayed copies of Woodstock Nation. 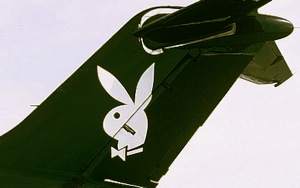 In sharp contrast to the ultimate fate of the jumbo jet, on 24 February, a custom designed, lavishly appointed Douglas DC-9-32 was delivered to one Hugh M. Hefner, editor and publisher of Playboy magazine. 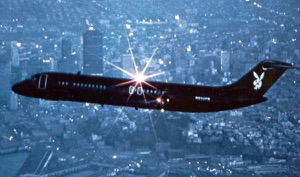 The Big Bunny, staffed by a Hare Force of flying Jet Bunnies (schooled at Continental Airline’s stewardess training facility) called to mind the lavish private rail cars of Gilded Age barons. While the Big Bunny redefined private jet travel, the pinnacle of commercial jet travel was waiting in the wings. 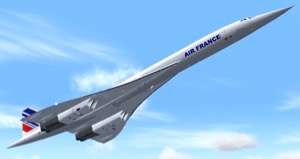 The supersonic Concorde jetliner first lifted off a runway in the South of France on an overcast Sunday morning, the 2nd of March. Some believe that man’s progress on earth can be measured by the speed of his earthly travel. From walking upright to moving astride the horse, sailing ships to steam; to trains, autos and aircraft. If you agree to that hypothesis, than Concorde, with it’s 2160 kph (1350 mph) cruising speed, represented an apogee of development.

Civilian man has not travelled faster before or since. Concorde flew from New York to London in less than three hours, flying so high that passengers could gaze out the windows and view the curvature of the earth.

View from Concorde: the darkness of space and the curvature of earth

All 100 passengers enjoyed the same Concorde Class service that included Champagne and caviar followed by five and six course meals served on fine china. The dedicated British Airways Concorde Lounge at New York’s JFK Airport was as stylish as the Concorde itself, filled with iconic 20th Century designs including chairs by Charles Eames, Le Corbusier and Eileen Grey.

Although Concorde did not begin commercial service until the seventies, it was very much a 1960’s design and concept, a brilliant reflection of the embrace of technological progress that was a hallmark of the decade.

For a period video tour of the Playboy Big Bunny including a glimpse of Hefner’s 1969 Mercedes-Benz 600 6-door Pullman and vintage airborne entertainment technologies including 2” quad videotape and 8-track Stereo 8 audio, view this YouTube clip.