American appliance manufactures began upgrading and stylizing their wares in the 1950s to add Jet Age glamour to the heretofore humble workhorses of the household. The movement gained extra momentum in 1953 when Frigidaire introduced the first popular-priced appliances available in colour finishes. As an alternative to traditional white, buyers could now opt for Stratford Yellow or Sherwood Green. Other manufacturers responded with their own special palettes, and in short order all major kitchen appliances were being produced in a rainbow of colour from pastel pink to charcoal grey.

Emboldened by strong customer enthusiasm for this new focus on style, designers began reconsidering the basic design features of many appliances. The most radical rethink was in the kitchen range. Manufacturers embellished their stoves with gleaming chrome and stainless steel trim, and the once unadorned backsplash behind the burners became an “instrument panel” festooned with stylish knobs, pushbuttons, clocks and cooking timers.

In 1959 Tappan took a giant step further by rethinking the entire form factor of the traditional stove, resulting in the ground-breaking Tappan Fabulous 400. Instead of the conventional low single oven that required stooping down to cook or clean, the 400 featured dual ovens located at eye level, both lined with gleaming stainless steel and fitted with full glass doors. The smaller oven had an electric rotisserie motor fitted at the rear. Burners were installed in a slide-out drawer, complete with fold-down maple cutting board. The 400 could be built-in, but was most commonly installed on its own matching lower storage base cabinet.

Elvis bought a Tappan that still resides in the Graceland kitchen, protected from inquisitive visitors by a clear acrylic cover.

Covering the unsightly burners when not in use was an idea that meshed perfectly with the tenets of the Jet Age push-button era. Anything having to do with chores or menial tasks was to be eliminated though the miracles of modern engineering; or otherwise covered or hidden away.

Tappan’s radical new design was soon copied by competitors; the most noteworthy being the Custom Imperial Flair of 1960 from the Frigidaire division of General Motors.

The Flair improved on the Fabulous 400 in two key areas. Rather than lined up in a single row, the burners were staggered with two front and two rear allowing for extra stovetop workspace. The sliding drawer had two stops, the first exposing just the front pair of heating elements, the second offering access to all four.

The other difference, and a significant innovation, was the oven door suspension. Instead of being hinged at the sides and swinging out over the burners, the Flair doors were attached to parallelogram hinges with counterbalancing springs that swung the doors straight upward and out of the way for safe, easy access. If that wasn’t enough, the stainless steel oven liners slid out for easier cleaning.

Frigidaire Custom Imperial Flair with right-side oven door in the open position. The Turquoise shown above and Coppertone were the two most popular colours for U.S. appliances in the 1960s. On the cooktop is a matching turquoise Kobenstyle casserole by Jens Quistgaard for Dansk; designed in 1956, it remains in production today.

The Flair went on to become the free-standing stove of 1960s America. It was widely seen in the kitchen of Darrin and Samantha Stephens on Bewitched, and was recently featured in the home of Pete and Trudy Campbell in season five of Mad Men, set in the year 1966. 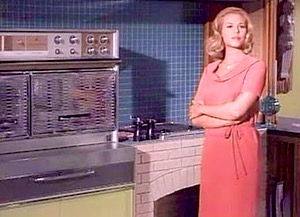 Samantha Stephens with her Flair on the set of “Bewitched.” The Flair was the centerpiece of the Stephens kitchen from 1964 to 1969.

Currently, many homeowners like to fantasize themselves needing a commercial kitchen ready for Gordon Ramsay or Emeril Lagasse to step in and prepare a multi-course feast. As a result, a La Cornue, Aga or Viking is usually given pride of place. Alas, none of these have the ingenuity of design, charm and stylish flourishes of a Flair; nor the easy, safe ergonomics of an eye-level oven with slide-up door. 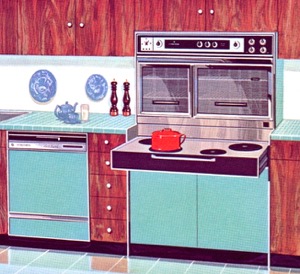 Unfortunately, kitchen design has retreated into the past. In these early decades of the 21st Century, the majority of homes still feature a stove with a bend-down oven barely off of the floor, or a built-in cabinet-mount oven with an antiquated bottom-hinged door that threatens to sear the chef whenever food is inserted or withdrawn. Since the demise of the Frigidaire Flair, basic oven design has not moved forward; it has gone backward.

UPDATE: When I posted this article, I was not aware that there were so many devotees of these wonderfully functional and stylish ranges. Amazingly this post has recorded some of Auto Universum’s highest traffic, and many people have contacted me regarding parts availability and units for sale or purchase. I can tell you that replacements are quite rare. 54monroe sells miscellaneous parts on eBay, and Antique Appliances has a limited number of parts. For new or rebuilt clock/timer assemblies, try General Time Repairs.

For selling, purchasing, technical assistance and parts scrounging, there is a Google Group Forum for the Frigidaire Flair.