Mankind has been using light to tell the time since the days of ancient Egypt. While early shadow clocks and sundials utilized light and shadow, a new clock was developed in 1970 that displayed the time using coloured artificial light generated by rotating polarization filters.

It has been said that if you ask an engineer the time, he will tell you how to build a clock. What do you suppose would happen if you asked a condensed matter physicist whose friend was an architect? You would end up with an Aurora Clock. 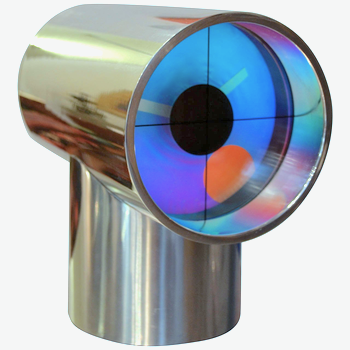 The Aurora was conceived in early 1970 by ex-NASA physicist Jordan Kirsch and architect Jim Hamilton, who had just completed design work on the passenger cabin of the McDonnell Douglas DC-10. The clock was born of necessity; NASA announced it would soon be closing the research facility that employed Jordan “Jay” Kirsch. Entrepreneurial by nature, Jay decided to team with Jim Hamilton and come up with marketable consumer product that would reflect their complementary skills.

Their goal was a product of exceptional design, hopefully one that would might find a place of honour in a museum collection. Their first attempts led them in the direction of liquid crystal displays and fibre optics as rapid strides were being made in both technologies. NASA in fact had used fibre optics for image transmission on Apollo space missions.

Fate intervened however as the Polaroid Corporation headquarters just happened to be located across the street from NASA’s Electronic Research Center. Once Jay and Jim began experimenting with samples of the firm’s proprietary polarizing and optical retarding materials, the basic concept for the Aurora was born.

Encased in a tubular housing of polished aluminium, the final design utilized a pair of polarizing sheets separated by a set of birefringent filters, one of which would continuously rotate. The hands were constructed of birefringent material of a complementary retardance value, insuring that they transmitted a colour varying from that of the clock face at any given time.

As a result of the revolving filters, each minute the clock face, handset and large seconds dot cycle through a wide spectrum of contrasting colour.

As was the custom for the era, the clock maintains accurate time thorough the utilization of a synchronous electric drive motor locked to the AC frequency of household supply current.

Looking to develop a market for the clock, Jay brought their prototype to the Georg Jensen shop on Madison Avenue in New York. Impressed with the clock, the store manager recommended that Jay present the design to Tommy Hodges at Rathcon, Inc., whose firm was already manufacturing a light-display clock, the Orbita. Jay flew down to Rathcon’s Dallas headquarters the following day.

Rathcon proceeded to beginning tooling up for manufacture of the clock and simultaneously retained the design team of Al Corchia and Rudolph de Harak to refine the case design. The final product was then introduced to the public as the Rathcon Spectrum.

Uneasy over the manufacturing quality of the Rathcon clocks, Kirsch and Hamilton soon took over responsibility for production, whereupon the clock became the Kirsch/Hamilton Aurora. 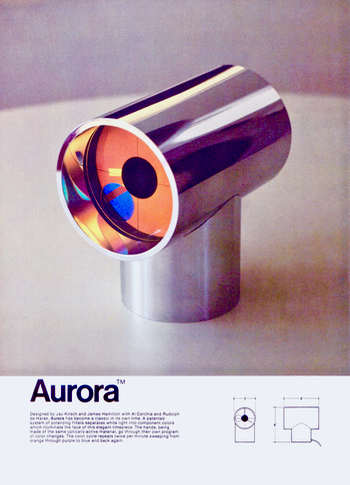 The designers of the Aurora met their goal of developing a product of admirable design quality, and the clock was an instant hit. It was spotlighted in the Museum of Modern Art’s annual design catalogue, enjoyed pride of place in the homes of Mel Tormé and Frank Sinatra, and over the years original examples have been fought over in a number of high-profile divorce proceedings.