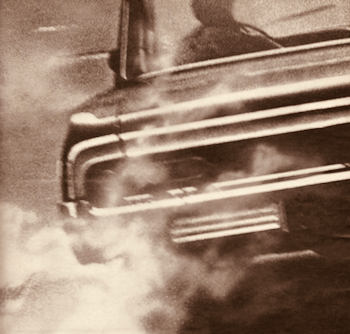 Fifty years ago, new 1968 autos began appearing in showrooms across America. These were a bit different from previous new cars; for the first time their design was heavily influenced by the U.S. government. New federal regulations covered two key areas of automotive engineering with twin goals in mind: a reduction of harmful vehicular emissions and increased safety for drivers and passengers. Today Auto Universum looks back at the early years of emission reduction.

Little thought was given to the dangers of airborne pollutants until after World War II; previously, it was usually overlooked as an unfortunate but inevitable side-effect of progress and prosperity. With the ever-increasing power generation and manufacturing activity of the postwar period however, environmental conditions began worsening, and concerns over air quality increased substantially following two milestone events. 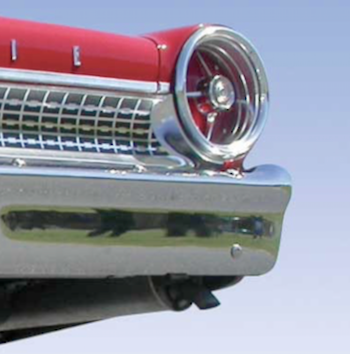 Los Angeles, while never suffering an extreme outlier event like those above, suffered from consistently occurring temperature inversions due to the surrounding ring of mountains. Following its huge post-war expansion, the Los Angeles basin was increasingly smoggy; the meteorological inversions causing entrapment of a cornucopia of emissions from automobile traffic, industrial activity and backyard incinerators. 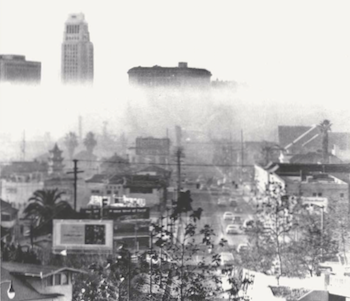 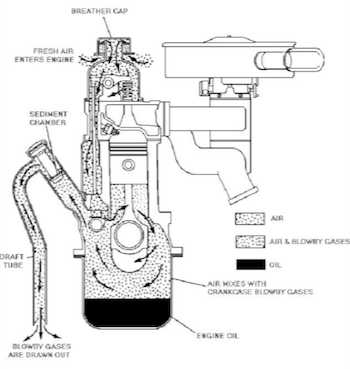 While such systems were not new, dating back to at least the 1948 Fiat 500 Topolino, most cars had been using a simple road draft tube, venting crankcase vapour to the atmosphere. 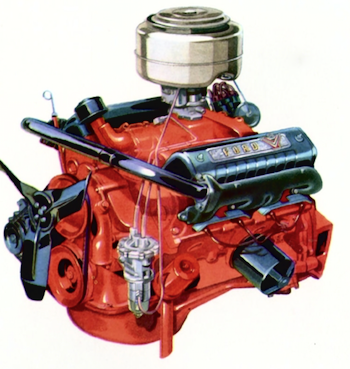 Crankcase vapours were actually worse than tailpipe emissions in their variety and concentration of pollutants. In addition to the hydrocarbons, carbon monoxide, and oxides of nitrogen that got by the piston rings, the crankcase gases contained large quantities of unburnt raw fuel vapour and a myriad of volatile compounds evaporating from hot lubricating oil. 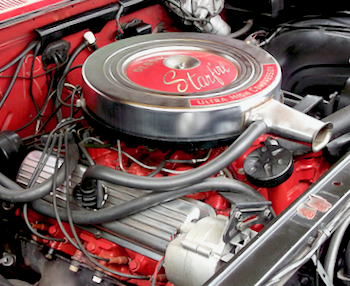 The American public became more aware of environmental concerns in 1962, when Rachel Carson’s book Silent Spring was published and serialized in The New Yorker magazine. The book brought nationwide attention to environmental awareness, eventually leading to a ban on DDT and the creation of the Environmental Protection Agency.

Most U.S. manufactures standardized such systems on 1963 models nationwide (with most importers following suit.) Later in the year, the U.S. Congress passed the Clean Air Act of 1963, establishing the framework for setting federal emission limits on automobiles. 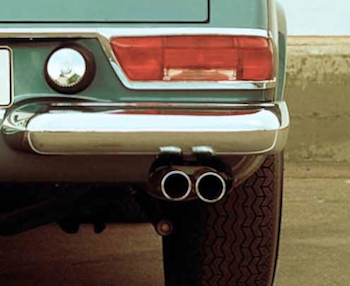 1968 was the big year for U.S auto emission control. Every new vehicle sold had to meet new Federal standards for HC and CO whether domestic or imported. U.S. manufacturers utilized the same approach used two years earlier in California while many Chrysler and imported models, especially those with fuel injection, were able to meet the requirements without an air pump.

Emission control legislation would ultimately prove beneficial to both the environment and engine efficiency, but it did not seem so at the time.

Low emissions are achieved when peak combustion efficiency is realized, which also promotes maximum power output and minimum fuel consumption. The basics of emission control are quite simple: ensure an ideal fuel/air mixture inside the cylinder, maintain high surface temperatures in the cylinder head and piston crown, and strive for high average combustion temperature while simultaneously avoiding high peak temperatures.

Actually achieving these goals is not quite so easy, particularly in a time when engine control systems were analogue, mechanical or pneumatic, and quite primitive. The original solutions of 1968 were initiated without a lot of real-world testing time and were not without problems. Beginning with 1970 models, emission standards became more and more stringent while automakers struggled to keep pace resulting in increasingly onerous side-effects. 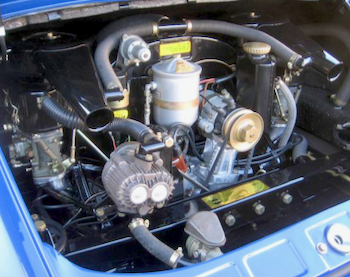 1968 Porsche 912 1.6-litre opposed four with Rootes-type air pump. Porsche used the more normal convention of borrowing clean air for the pump intake from the carburetor air filter. Air pumps had to have nylon bearings or sealed permanently-lubricated needle bearings, otherwise evaporating lubricant vapor injected into the exhaust would increase rather than decrease emissions.

While toxic emissions declined; performance, fuel efficiency and drivability all unfortunately decreased as well. American car buyers of the late 1960s and 1970s became the inadvertent beta-testers of low-emission technology 1.0. In addition to reduced performance and fuel economy, many driveability issues surfaced, from dieseling on shutoff, hesitation and stumbling, to backfire-like uncontrolled exhaust manifold combustion from malfunctioning air injection systems.

The biggest problem was the carburettor. When we look back today at the relative low-technology of this fuel/air blending device, it seems a wonder that cars so equipped manage to run as well as they did. A carburettor relies solely on low-atmospheric pressure below the venturi to draw fuel into the airstream, largely determined by only two factors, engine vacuum and throttle position. Because of it’s crude design, a carburettor will generally only deliver an optimum stoichiometric fuel/air mixture under a narrow band of operating conditions, usually cruising on a flat road at half-to-3/4 throttle. 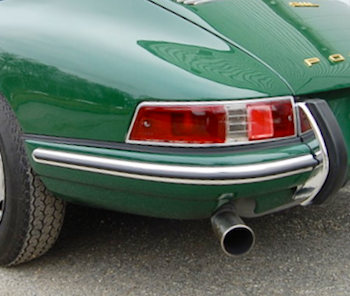 Under all other conditions, the carburettor will produce a mixture that is either too lean (insufficient fuel) or too rich (excess fuel). An overly lean mixture produces drivability problems in cool weather and high combustion temperatures that can cause detonation. A slightly rich mixture however is more benign (except for potential plug-fouling), and for this reason, most carburettors were normally set to deliver just such a blend. Unfortunately, a rich mixture leads to unburned fuel being expelled from he combustion chamber, spiking the emission of undesirable hydrocarbons.

For 1968, carburettors had to be rejetted to deliver a mixture much closer to ideal, losing the safety cushion of a slightly rich blend. Not surprisingly this occasionally led to misfiring and a problematic idle. Most manufacturers added a hot air stove to the exhaust manifold to deliver warned air to the carburettor at low ambient air temperature and moderate throttle openings to help alleviate such problems. While common in Europe, such devices had only been seen in America on Ford MEL and Challenger V8s. Many ill-informed Car Nutz promptly removed these in a mistaken idea that they inhibited performance. 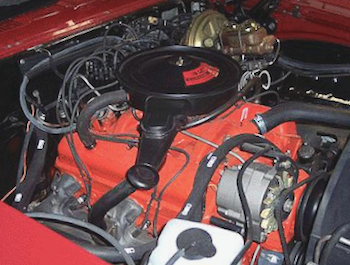 1969 Camaro 327 (5.4-litre) V8 displaying  hot air stove on exhaust manifold with duct leading to air filter snorkel. A vacuum-operated flap controlled by intake air temperature and throttle position determined the mix of hot and cold air. Under wide-open throttle (low vacuum) the flap would close off hot air flow regardless of outside temperature.

Ignition timing technology was the other villain. Distributors relied only upon engine rpm, manifold vacuum or a combination of both to determine onset of combustion. Like the case with carburetors, this was a somewhat suboptimal approach and meant that timing was always a compromise.

To meet the new regulations, ignition timing generally had to be retarded at low speed to insure complete combustion. This had a beneficial effect on emissions, but often reduced all-important off-the-line acceleration.

In the early 1970s, newer regulations required closed fuel systems as well. While earlier vehicles had open-vented fuel tanks and carburetor bowls, new cars were now required to capture fuel vapor in a charcoal canister. During low-load part-throttle operation, trapped vapor would be released into the engine air intake to be burned off during combustion.

In 1973 federal regulations were expanded to include limits on emissions of oxides of nitrogen. These were generally kept in check by part-throttle exhaust gas recirculation (EGR). While this was usually a simple steel tube from the exhaust manifold to the intake manifold with flow controlled by a vacuum-operated valve, some manufacturers first routed raw exhaust through a filter or heat exchanger. 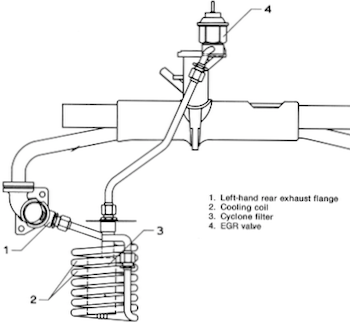 As emission limits became increasingly onerous, U.S.-market cars tended to become ever thirstier, less powerful and more prone to drivability quirks. The arrival of catalysts on 1975 models helped address the decline; but it wouldn’t be until around 1990, with the increasing prevalence of electronic engine management, that overall performance would come to match pre-1968 models. 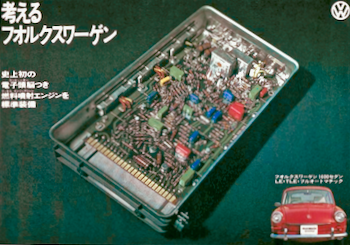 A portent of this electronic future arrived with little fanfare in the fall of 1967. While other manufacturers applied a variety of engine adjustments and band-aids to meet the new emission standards, new VW Type III vehicles were arriving in the U.S. with never-before seen Bosch Jetronic electronic fuel injection. 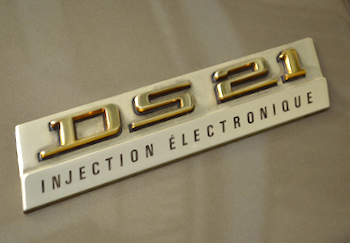 Other manufacturers quickly began adopting the Jetronic system including Citroën, Mercedes-Benz (on their new 3.5 V8), Saab and Volvo. VW expanded its use, incorporating it into the new 411 LE and VW-Porsche 914. Further development of electronic injection led to development of increasingly powerful ECUs that eventually took over control of ignition timing, EGR, fuel vapour recovery and other parameters; incorporating real-time data from exhaust gas oxygen sensors and knock-detectors to continuously fine-tune mixture and timing regulation for optimal efficiency and emission reduction.

As a result, today we have engines with higher specific output than ever imagined in the 1960s despite having to meet regulations that limit emissions to a mere fraction of what they were fifty years ago.

In the late 1970s, Japan introduced emission regulations based on U.S. legislation, followed by the EU in 1992.