1969. The turbulent coda of the nineteen-sixties. The Année Érotique.

Apollo 11 landed men on the moon, 400,000 attended the Woodstock Music & Art Fair and the world witnessed the maiden flights of the Concorde and Hugh Hefner’s DC-9 Big Bunny.

The previous spring Plymouth was pushing their advertising agency, Young & Rubicam, to reinvigorate the ad campaign supporting their performance lineup. The agency turned to Paul Williams, a Y&R resident artist whose work presented for the project adroitly blended the proportional distortion and grotesqueries of the Ed “Big Daddy” Roth studio with the colours and Art Nouveau flourishes of psychedelia. 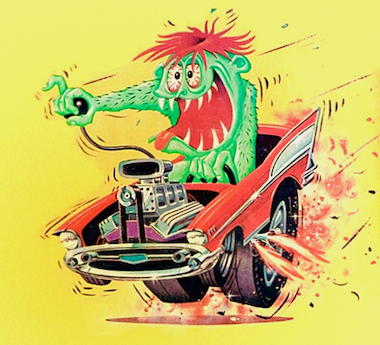 The timely new style was perfect for attracting the eye of the youth market that Plymouth was fervently targeting for their Barracuda, GTX and Road Runner.

Preliminary ads appeared in the summer of 1968, with the campaign going into full swing in the fall with the debut of Plymouth’s ’69 models.

The new artwork was ideal for 1969, that final year of the storied decade. Psychedelia was becoming more mainstream, but its popularity would prove ephemeral as the collective spirit of Woodstock morphed into the Me Decade.

Dean Martin as Matt Helm in The Wrecking Crew, June 1969. 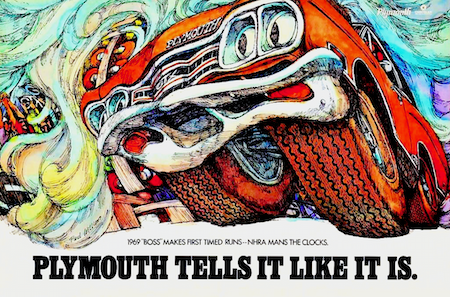 1969 Plymouth Road Runner illustrated with Option W23 15″ Kelsey-Hayes cast aluminium Road Wheels. These wheels were unfortunately defective and were recalled immediately to be replaced with pressed steel wheels. Only a few sets remain in the wild. 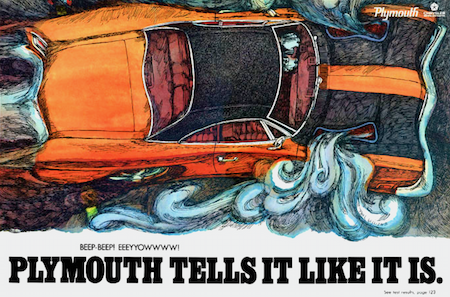 1969, a year so tumultuous and pivotal; it was reimagined and revisited fifty years later. 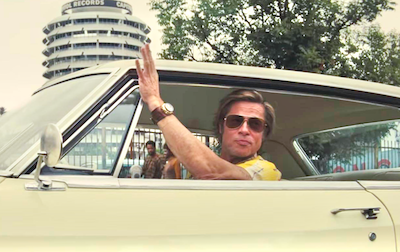 Cliff Booth passes the Capital Records Tower while cruising Hollywood Boulevard in Rick Dalton’s ’66 Cadillac Coupe de Ville in Once Upon A Time In Hollywood, set in 1969.

Shortly after the calendar signaled the arrival of a new year and a new decade, Plymouth’s  hallucinationally colourful hand-illustrated psychedelic performance imagery was phased out in favor of innocuous straightforward photography.

3 thoughts on “1969 and the Psychedelic Artwork of Paul Williams; when Plymouth Told It Like It Was”